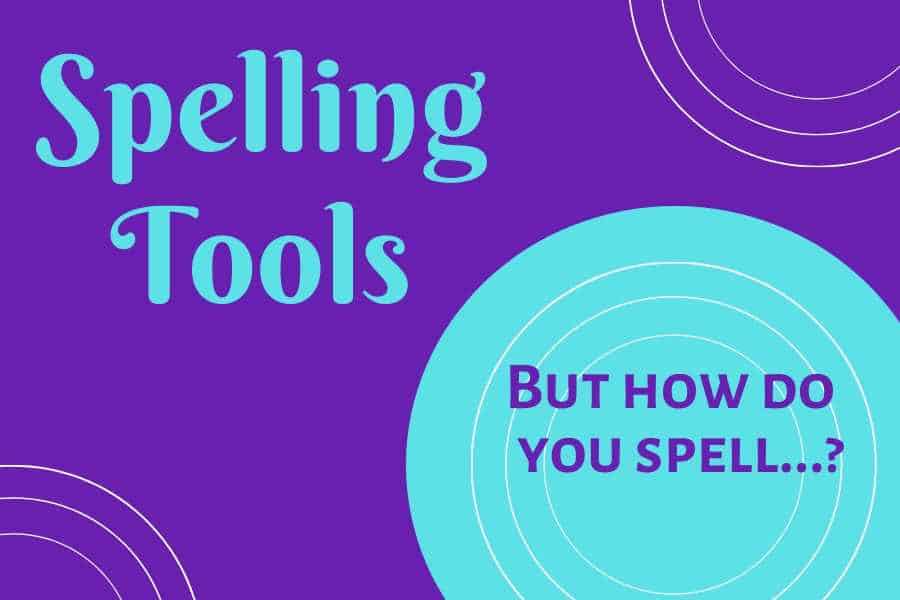 But how do you spell…?

If you teach young children, you probably hear this question on an almost-daily basis.  I am often asked by teachers, “What do you do when children refuse to write unless they know the correct spelling?”  This is a really important question that I will attempt to answer here.  First, let me remind you of the importance of encouraging children to “sound out” or “invent” the spellings of words they don’t know.  According to expert spelling researcher Richard Gentry,  the practice of inventing spelling leads children to consciously try to hear the sounds in words so they can match letters to the sounds. Invented spelling is an excellent way to further develop phonemic awareness (Gentry, 2000) which we know is critical for early reading success. Research shows that invented spelling can have a positive effect on helping children develop as spellers and writers but also as readers. Spelling ability fosters word recognition by enabling a letter-sound association storage of words in memory (Gentry, 1997).

I was once in a kindergarten classroom looking over the students’ writing journals and was alarmed to see every single child’s journal neatly printed with no spelling or punctuation errors.  I decided to stay and observe what was happening during writing time.  This is how it went: the children were told to think of a story and draw a picture to go with it.  (So far, so good).  Then the teacher went around the room and asked each child to dictate his/her story while she wrote it down on a separate piece of paper.  The children were then instructed to recopy the story using only the correct spelling and punctuation.  Never once were the children given the opportunity to say the words, stretch them out, and listen for the sounds in the words.  I really believe that we are robbing our students of important literacy opportunities when we don’t allow them to struggle through this process a bit.  We are also teaching them to be dependent on adults in order to write and that conventions are more important than ideas.

So we know that we shouldn’t just hand out the correct spelling to children every time they ask, but what do we do about it?  For some children, telling them to “just use your very best first-grade spelling” is enough.  Many other children will not be satisfied with this suggestion, so here are a few techniques you might try:

I first read about “magic lines” in Lola Schaefer’s Teaching Young Writers: Strategies That Work. This technique helps young writers remember to leave spaces between words. It also helps emerging writers separate the text into manageable units that they are then able to “stretch out” and attempt to spell.

Begin by having the student decide on a sentence of text. Then have him count the number of words in the text on his fingers. Next have the student draw the appropriate number of lines on the paper—one line for each word. Once the lines are drawn, the child may begin stretching out the sounds in the words and writing them on the magic lines. Even if they can only hear the first letter, they feel like they are beginning to write words.

Below are some samples from Schaefer’s book (click to enlarge).  As you can see, this helps children move through the developmental spelling stages.  Once they no longer need this tool, the lines begin to disappear.

I’m Not Afraid of My Words
Many children have rich speaking vocabularies, but because they can’t spell these words yet, they “play it safe” and only include in their written stories the words they know how to spell correctly.  This ritual called “I’m Not Afraid of My Words”, developed by Lisa Cleavland and described in About the Authors: Writing Workshop with Our Youngest Writers by Katie Wood Ray and Lisa Cleavland, encourages children to take risks with their writing and celebrates their approximations.  When a child attempts a difficult word, s/he gets to write his/her name on the chart (see below).  The teacher writes the child’s spelling and the conventional spelling.  Take a look at the last word on the chart.  This first-grader was attempting to write “sea anemone”.  Notice the “kne” at the end of the word.  He was spelling by analogy because he knew that the “n” sound in “knee” is spelled with a “kn”.  That’s some pretty sophisticated spelling for a first-grader, if you ask me! 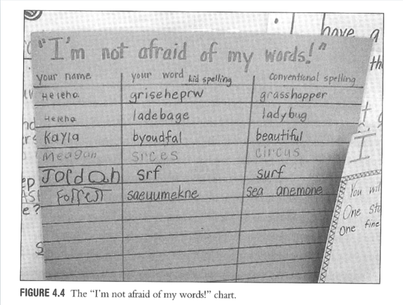 Turtle Talk
This is a strategy you can teach your young spellers to help them slow down a word to hear more sounds.  Tell them to “talk like a turtle”, saying the word very slowly and stretching it out so that they can hear each sound.   Then have them write just the sounds they hear.  Don’t worry if they don’t spell the word conventionally yet.  This is a great way to build their phonemic awareness.

I hope these strategies will help your student writers become more independent when attempting to spell words they don’t know.

For many of our readers, yesterday marked the first day of Daylight Saving Time. For some of us that means the days are about to

While digging through baskets of books in our library at home, my son Cameron found a volcano book with a sticky note stuck to the

Have you heard the following piece of advice before? “Teach the writer not the writing.” If so, have you ever thought about what it means?

Building relationships with our students is a crucial step to creating a classroom of thriving learners. When students walk through our door, they will be